Is it possible to convert my existing diesel engine, so it can be used in potentially hazardous area?

There are two areas that determine the complexity of the conversion.

Most common potential ignition source on the diesel engine is related to hot surfaces present in the exhaust system. Most of diesel engines in marine specification have water cooled (wet) exhaust manifolds and turbines, so external surface temperature of those components is controlled by water jacket. Engines in marine specification are preferred candidates for Zone 2 conversion, as hot surfaces in the exhaust system are already eliminated at engine production line. Diesel engines in industrial specification are more challenging as those are fitted with “dry” exhaust manifolds and turbines. During full load operation dry manifolds and turbines can be red hot, so those need to be coated, or replaced with water-cooled version before engine can be placed in Zone 2 potentially hazardous area. Thermal coating is a very time-consuming process, as complete coat layer needs to be durable and gas tight over the entire engine lifetime. This is the main reason why JB Safe Diesel do not offer thermal coating for engine exhaust system. Replacement of existing dry manifold and turbine with water-cooled version is also expensive, as parts need to be outsourced via engine manufacturer aftermarket channel. In addition, engine emission certificate is voided when aftermarket turbine of different type is installed.

Modern diesel engine is equipped with electronic speed governing system which ensure optimal fuel injection for better fuel economy and lower exhaust emission. Electronic speed governing system contains different sensors, electronic injectors, and main control unit (ECU, or ECM). All those components are considered as potential ignition sources, so they need to be assessed and tested according to specific certification scheme. Most common certification scheme according to series of EN60079 standards requires detailed information about all components and includes thermal endurance testing, electric strength test, IP testing and drop test. This is the main reason why such certification is time consuming and quite expensive. Certification can be justified in case when large amount of the engines will be subject to Zone 2 conversion, otherwise it is better to use engine with already ex-approved speed governing system.

Is it mandatory to use exhaust flame arresters?

Immediate engine shutdown caused by 3GHI Lite system is not allowed for emergency, or essential applications (i.e., fire pumps, emergency generators, crane drivers). In those cases, exhaust flame arresters shall be used when exhaust is discharged to potentially hazardous area. 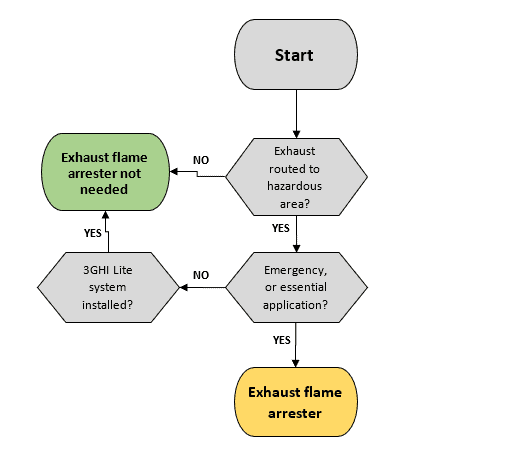 What is maintenance interval for exhaust gas cooler?

What is change (cleaning) interval for exhaust flame arrester?

Same as for exhaust gas cooler – change, or cleaning interval for exhaust flame arrester depends on soot emission from the engine.

Engines running at optimal and constant load are low on soot emission, so cleaning interval for exhaust flame arrester will be longer. On the other hand, are the engines which are subject to cold operation, low load, and rapid load changes. In this case, cleaning interval will be shorter as result of high soot emission.

Can I free issue diesel engine for Zone 2 conversion at JB Safe Diesel?

Yes, we accept free issued engines for Zone 2 conversion at our specialized workshop. Diesel engine can be in used condition, or brand new. Check our SafeCooler portfolio to see which engines are currently supported with generic Zone 2 conversion kits. If your engine is not on the list, please contact us for custom made solution.

What is operational ambient temperature limit for Zone 2 diesel engine?

Ambien operational limits are given on engine data plate, and/or Declaration of Conformity document. If no information is provided, then standard operational temperature range of -20°C…+40°C shall be assumed.

Lower temperature limit is normally related to engine starting capability. Most of the diesel engines will start down to -10°C ambient. Cranking at lower temperatures requires starting aids like oil, or coolant heaters.

Is it possible to convert diesel engine for operation in Zone 1?